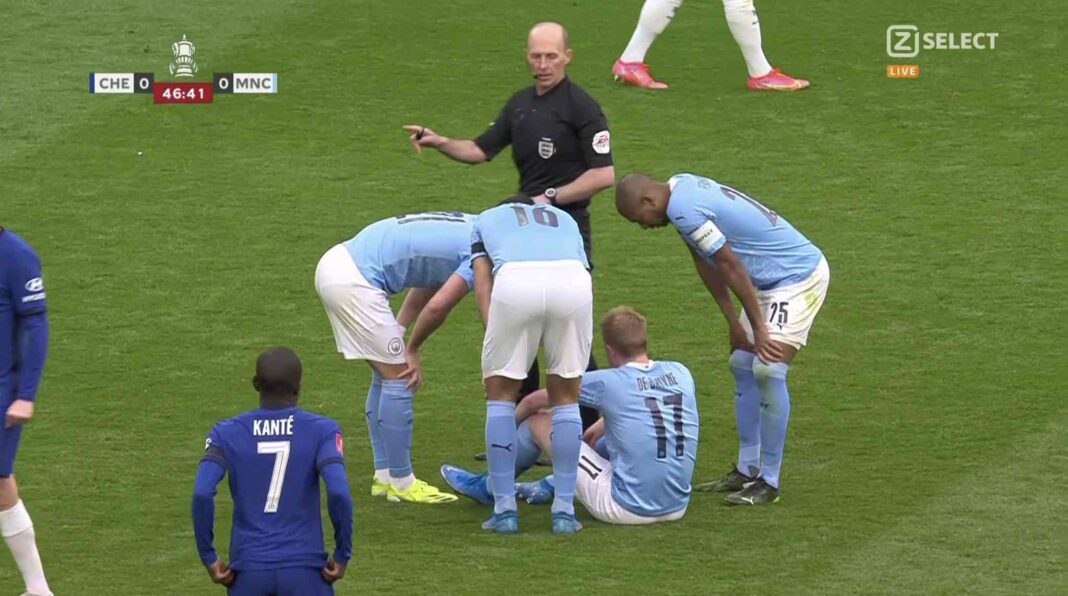 Additional update surrounding the injury sustained by Kevin de Bruyne during Manchester City’s 1-0 defeat to Chelsea on Saturday afternoon have come to light – prompting many Sky Blues to react as this news emerges.

The Belgian maestro was forced off with an injury just 3 minutes into the second 45 minutes as Pep Guardiola’s men crashed out of the FA Cup at the semi-final stage on Saturday.

Report earlier had claimed De Bruyne’s ankle is ‘seriously swollen’ and may have sustained some level of ligament damage.

But according to Mike McGrath of the Telegraph on Sunday, Kevin de Bruyne’s ‘initial assessment’ on his ankle injury has shown ‘no significant damage’ and increased hopes of the Belgium international playing in Manchester City’s season run-in.

The report adds that De Bruyne will continue to be assessed as the swelling in his right ankle goes down, may have been rested for Villa [A] regardless of injury, and it will be determined in the coming days if he has a chance for the Carabao Cup final.

In reaction to the news shared on Twitter by Man City Xtra and City Chief, many Man City fans, who were getting a little nervous have been expressing their thoughts and opinions

Massive news. It’s all about PSG!

He doesn’t need to be risked till the PSG game

Really good news. Should be ready for PSG and can still get the Playmaker award

Best news so far. Pep would have been vilified if KDB suffers any injury set back