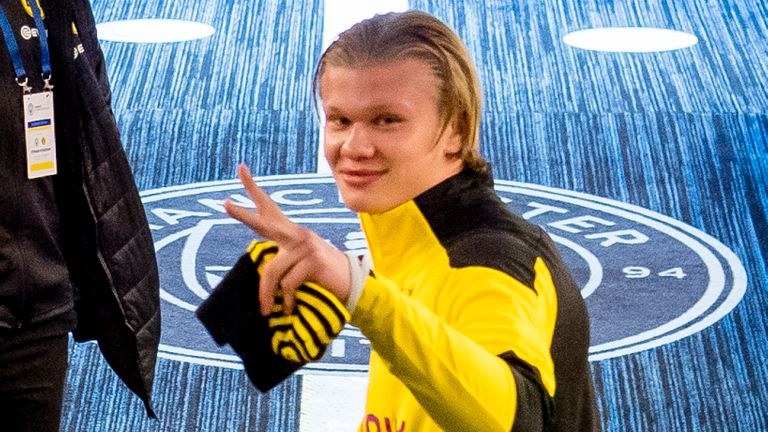 Manchester City are set to join the race to sign Fiorentina striker Dusan Vlahovic this summer as Pep Guardiola eyes a long-term replacement for Sergio Aguero, according to report from Italy.

The Citizens, who are expected to be in the market for a new striker at the end of the 2020-21 campaign, have been linked with several strikers as they search for a potential replacement for the club’s all-time leading goal scorer.

There is an abundance of speculation in the media at the moment suggesting that City are determined to sign a new centre-forward once the summer transfer reopens, and Erling Haaland is a name that has been linked on several occasions.

However, having publicly announced lack of funds and given the amount of money a deal for Haaland could cost, it appears Manchester City could be going for the next best thing.

According to Corriere dello Sport as relayed by Sport Witness, Manchester City, who haven’t been involved in the fight Dusan Vlahovic, have join Manchester United and Liverpool in the race for the signature of the Fiorentina forwad.

The report explains that Fiorentina are first focusing on retaining their Serie A status before dealing with Vlahovic’s future, as it’s the Serbian they are relying on to helped keep them away from the threat of relegation.

Also Read
‘Invest in a striker’, ‘can’t see anyone displacing Cancelo’ – Some Man City fans react as club ‘Drawing Up Plans’ on Left-Back Signing for 2022
‘Please no’, ‘would rather Nkunku or vlahovic’ – Some Man City Fans flock as Darwin Nunez transfer rumour emerges
‘We’re massive’, ‘He is already a Mancunian’ – Many Man City Fans react to Guardiola’s comment on exit plan

The 21-year-old apparently does not intend to extend his contract with La Viola expiring in 2023, but their owner Rocco Commisso is equally firm in his position: he does not want to sell Vlahovic and – if the initial request of €40m seemed steep – Fiorentina now want €50m from his sale.

Erling Haaland is the dream moves for the Sky Blues. However, Manchester City shouldn’t ignore the Fiorentina stand-out striker talent as he could prove a good value alternative.

His form with 16 goals in 31 appearances this season, as well as his imposing physique, is what has caught the attention of a few Premier League clubs.