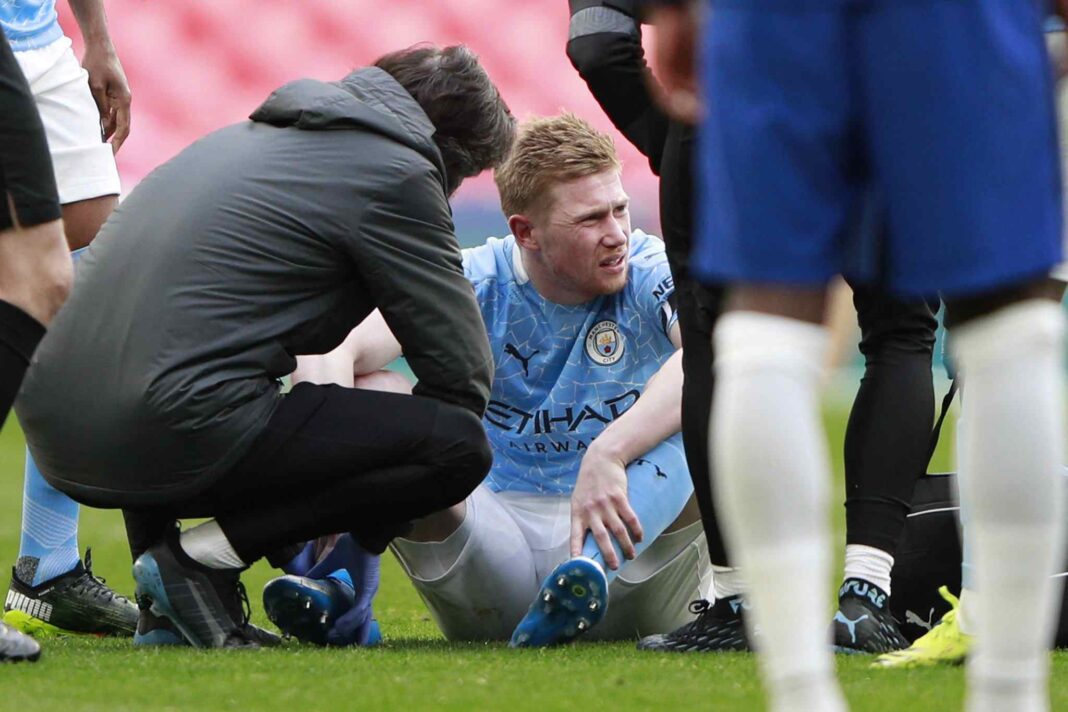 Additional update surrounding the injury sustained by Kevin de Bruyne during Manchester City’s 1-0 defeat to Chelsea on Saturday afternoon have come to light – prompting many Sky Blues, who are getting a little nervous ahead of next week’s Carabao Cup final after to react as this news emerges.

The Belgian midfielder was forced off as Pep Guardiola’s men crashed out of the FA Cup at the semi-final stage on Saturday.

The defeat will be a sour note on an excellent season for City, but there was an even more painful moment when midfield maestro Kevin De Bruyne limped off with an ankle injury.

Guardiola was asked about the midfielder after the disappointing result – but his response was not as postive as City supporters would’ve wanted to hear.

“I don’t know – he has pain. Tomorrow we’re going to make a test with the doctors but it doesn’t look good. We will see tomorrow.”

According to European football correspondent and Belgian journalist Kristof Terreur, De Bruyne’s ankle is ‘seriously swollen’ and his ligaments took a ‘blow’. This could mean City will only know the full extent of the damage in ‘a few days’.

Manchester City have to play Aston Villa in the Premier League on Wednesday ahead of the Carabao Cup final.

After Wednesday’s trip to Villa Park, Manchester City are not in Premier League action again until Gameweek 34 because their involvement in the EFL Cup final means they have no fixture in Blank Gameweek 33.

City fans are hoping for good news when Guardiola next gives an update as De Bruyne’s ankle injury will be a major concern ahead of a crucial run of fixtures during the business end of the season.

So he's season is over!😭😣
Need Mr. Whippy to carry us once more

True but he’s still our best player, would be bad if he’s out the season tho

we weren’t at our “best”. we were very good without him, but our best was with him

his season's over. wont be back until maybe gameweek 37 at which point it wont matter. will have to get through the league without him

He can have my ligaments for all I care

Guys we need to calm down, yes he is a massive loss BUT when he was out in January ans February its when we played our best football and other players like Gundo stepped up. Be positive

We are actually going to only win the prem which sounds ungrateful but before today we where in consideration to have the most historic season from any English team. I really can’t see us winning the ucl without kevin