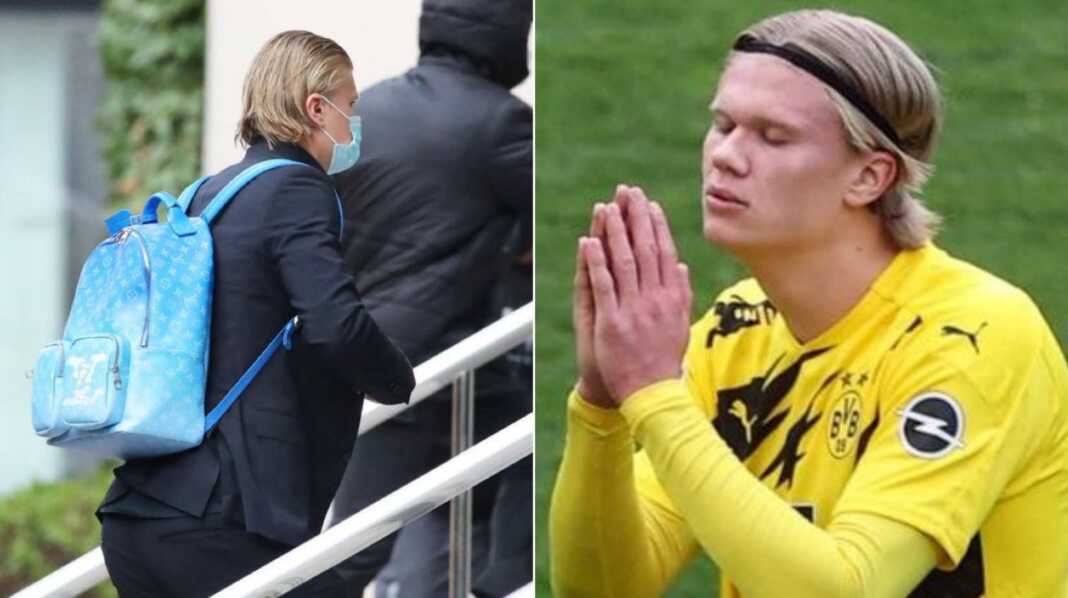 Some Supporters of Manchester City have been reacting to an image that emerged on Twitter regarding the club transfer target Erling Haaland.

The 20-year-old Norwegian has arrived in Manchester ahead of Borussia Dortmund‘s Champions League quarter-final first leg at the Etihad on Tuesday.

The Dortmund’s striker tops City’s list of replacements, who will have to beat off competition from the likes of Manchester United, Chelsea, Real Madrid, Barcelona, Bayern Munich and Juventus among others for his signature.

The 20-year-old would be a dream signing for City to replace Sergio Aguero, who is leaving the Etihad Stadium when his contract expires this summer.

While fans were unable to approach Haaland, Borussia Dortmund security staff agreed to take shirts in for the striker to sign inside the hotel.

The image which emerged on social media after being posted by City Xtra showed the striker entering the Lowry wearing a blue bag.

Also Read
‘We’re massive’, ‘He is already a Mancunian’ – Many Man City Fans react to Guardiola’s comment on exit plan
‘Keep him’, ‘whenever he plays he’s actually decent’ – Some Man City fans react as club make decision on Nathan Ake transfer to Newcastle United
‘Please no’, ‘would rather Nkunku or vlahovic’ – Some Man City Fans flock as Darwin Nunez transfer rumour emerges

This had lots of the Man City fans talking.

He’s wearing a blue bag and a blue mask… OMG 😍

Is it a hint of where he is playing next season 👀

Time for Txiki to do his magic! 🙌🏻

Leroy arrived at city training wearing red to get a move to bayern. Haaland arrives at city ground having blue backpack. All in favour except the fees, wages and commissions. And obv riola and Dortmund

We can’t afford him, the sooner you guys accept it, the better!