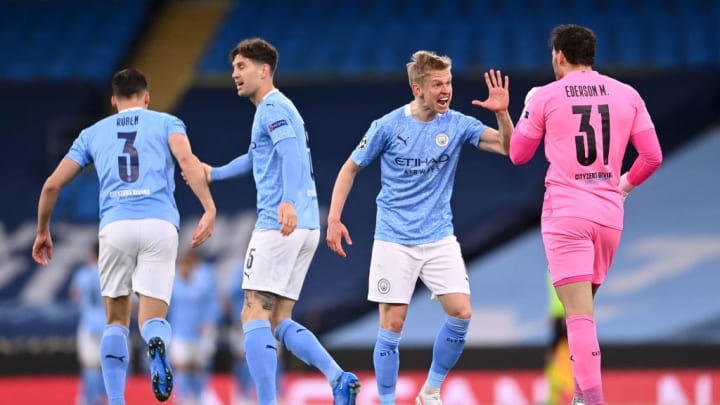 Manchester City fans went wild on social media after noticing a key moment between Oleksandr Zinchenko and John Stones during their 2-0 win over Paris Saint-Germain.

The Ukraine left-back was in tears at full-time on Tuesday evening as Manchester City secured their place in the Champions League final with a 4-1 aggregate win over Paris Saint-Germain.

Despite the fact he is not a nailed-on starter for Pep Guardiola’s side, the 24-year-old defender has proven to be a great option within the squad.

His introduction from the bench against PSG in the first leg appeared to give them a better balance on the pitch, and he assisted one of his side’s two away goals to inch them towards the Champions League final.

Zinchenko was rewarded with a starting berth in the second leg, which he took brilliantly well.

A marauding run into the left channel and expertly timed square pass to Kevin De Bruyne facilitated Riyad Mahrez’s opener, while a second-half block to deny Neymar was greeted by John Stones and Ruben Dias as if he’s scored a goal.

It was a moment that Man City fans were quick to highlight online.

This is the passion i want to see. Celebrating a block like a goal and im all for it. #MCFC #ManCity #UCL pic.twitter.com/n4E08slpRz

Zinchenko cementing that LB spot tonight as his #MCFC #MCIPSG

What a performance from Zinchenko. Remember he’s still a midfielder and playing fullback in one the biggest club games in the world. Under appreciated.

What a player John Stones has been tonight! Absolute superstar! #mcfc xx

With the Champions League final beckoning for City on 29 May, Zinchenko has every chance of starting on the left side of City’s defence in what would represent one of football’s most incredible success stories.