‘Better than Bruno’, ‘should take all our penalties’ – Man City fans reacts as incredible Training Footage Shows Ederson Could Be The Best Penalty Taker In The World 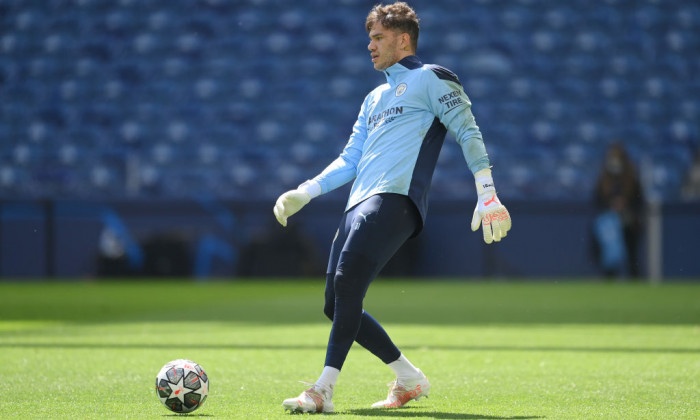 Manchester City goalkeeper Ederson produced a moment of sheer brilliance in training ahead of Saturday’s Champions League final against Chelsea – which have got many fans talking.

With Saturday’s final so closely-contested, it certainly wouldn’t be a surprise should to two Premier League rivals need penalties to separate them – and with Ederson’s performance in training, it would be no shock if he stepped up to take one.

City are clearly preparing for any eventuality ahead of the Champions League final after seeing their cross-town rivals Manchester United suffer an embarrassing defeat against Villareal on Wednesday.

Villarreal goalkeeper Geronimo Rulli fired the La liga side to a staggering 11-10 penalties victory over Manchester United in the Europa League final.

Ederson earlier this week declared he will take the fifth penalty in the potential Champions League final shootout – and set about honing his technique in Manchester City’s training session on Friday.

In a video, Ederson stepped up and smashed the ball into the top corner of the net.

🚀🥶 Ederson from the spot pic.twitter.com/7pnGxXebAJ

As noted by Marcelo Bechler , the 27-year-old took 11 penalties in training and scoring different types: Strong, placed in the left, right, waiting for the goalkeeper to move. He scored ten and missed one.

Ederson’s 91 per cent success rate is far above the average – which is in the region of 75 per cent – and he impressed with the variety of spot kicks he utilised.

City have struggled from the spot this season, and at one point it was speculated that Ederson would be on the list of penalty takers.

City missed four of their 11 penalties this season, with Raheem Sterling, Ilkay Gundogan, Kevin de Bruyne and most notably Sergio Aguero all missing from the spot.

If the Champions League final goes to spot-kicks like the Europa League final, then Man City could finally unleash Ederson.

Many Man City fans are excited to see the Brazilian take penalty after he showed off his technique in training on Friday.

He should take all our penalties

Score 10 and missed one? That have Man United written all over it. I don’t like the sound of that 🤣😂🤣

At least he is better then de gea

with how good his kicking is & how poor we are at pens what’s the harm in giving him ago? i assume he’d absolutely blast it top bins.