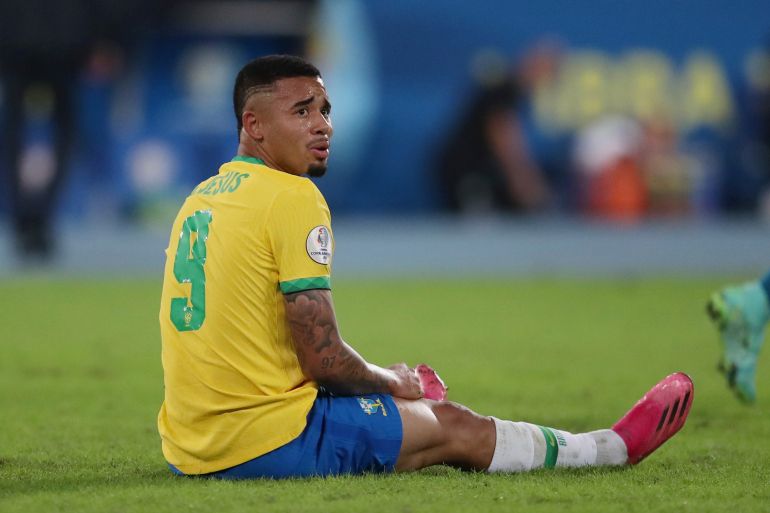 Manchester City striker Gabriel Jesus was sent off after hitting Chile’s Eugenio Mena with a flying kick in the 48th minute of Copa America quarter-final at Estadio Nilton Santos in Rio de Janeiro on Friday.

The 24-year-old Brazilian forward came in late on a challenge against Chilean left-back Eugenio Mena but completely whiffed on making contact with the ball as instead, he kicked the defender in the face.

Without much hesitation, the forward earned a straight red card from match official Patricio Loustau. It took the referee a matter of seconds to run over to Jesus and flash the red card in his direction.

The forward could have absolutely no complaints with the decision. He knew this challenge was worthy of a straight red.

Neymar and Brazil coach Tite said after the match that Jesus did not see Mena and accidentally kicked him as he tried to recover possession in the midfield.

The footage was shared on Twitter by City Chief, and it attracted plenty of attention from the fans, who took to the social media platform to share their thoughts and opinions.

No question about that. Almost worthy of a double red.

What a stupid play. That is an easy red

Why am I not surprised Jesus made an unnecessary challenge

I’ve got to agree with you there, even when he’s playing for City…he just needs to calm down

Brazil will next face Peru, who advanced to the semi-final after beating Paraguay 4-3 on penalties after a 3-3 score in regular time.

Brazil and Peru played the latest Copa America final in 2019, with the hosts winning 3-1. Jesus was also sent off in that match at Rio’s Maracana Stadium.