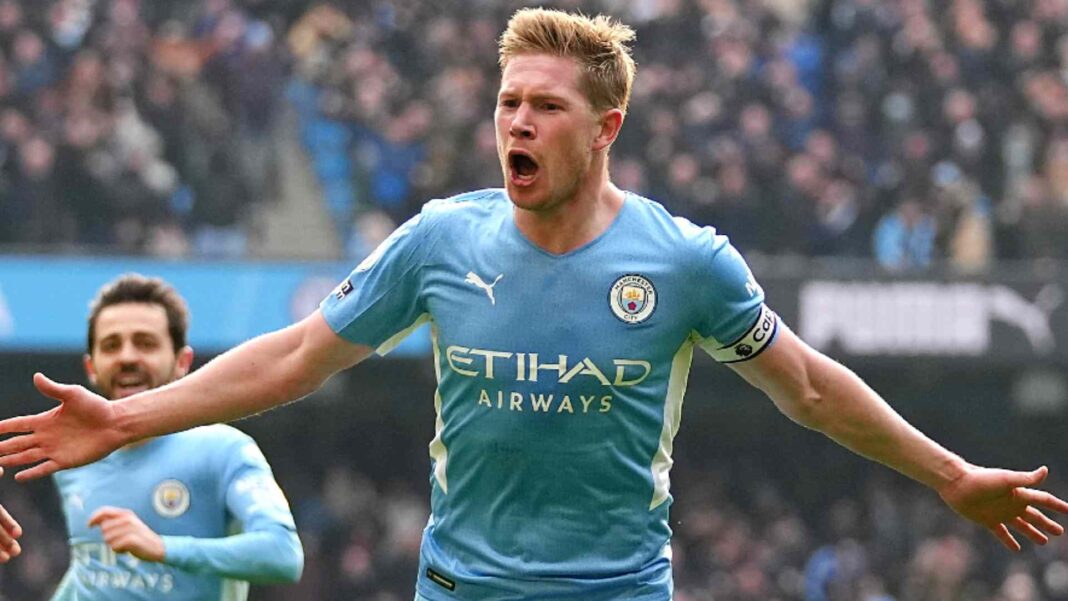 Many Manchester City fans have been reacting on social media, after Kevin De Bruyne became the only player to have featured in the EA Sports FIFA Team Of The Year for the past 5 consecutive years.

The FIFA 22 Team of the Year has been revealed with Kevin De Bruyne, Ruben Dias and Joao Cancelo among those who made the cut.

The XI was voted for by players of EA Sports’ popular yearly title and the ballot has produced some controversial results.

After a round of voting from millions of players of FIFA 22 and lovers of football from across the globe, EA Sports have now revealed their world XI to be recognised on the video game franchise in the coming days.

In midfielder De Bruyne is joined by Chelsea pair Jorginho and N’Golo Kante. The Belgian is also accompanied by two of his Manchester City teammates in the back four.

Joao Cancelo and Ruben Dias make up the left side of the defence, while there is a distinctive Parisian flavour to the opposite side, with Achraf Hakimi and Marquinhos lining up on the right.

Completing the team is another PSG star, Gianluigi Donnarumma, who also tasted Euro 2020 glory with Italy in the summer.

FIFA 22 Team of the Year

With this achievement, De Bruyne is the only player to have featured in the EA Sports FIFA
Team Of The Year for the past 𝟱 𝗰𝗼𝗻𝘀𝗲𝗰𝘂𝘁𝗶𝘃𝗲 years.

As expected, there was plenty of reaction from Man City supporters to this Kevin De Bruyne’s ‘insane’ achievement.

Here, then, is the best of what was said:

5 Ea Sports Team of the year appearances in a row. You’ll never sing that https://t.co/A9sMhlsfVO

This is insane
He is Goat level

wasn’t in the FIFA 21 one pic.twitter.com/cG6uwORXkD

That’s why he is best midfielder in the wolrd

If consistency was a person pic.twitter.com/3981NDx5ym

He must be due a Ballon D’or then surely. Or will it keep going to the old guard.

And he’s got this year’s team of the year and POTY sealed already 😁he’s inevitable https://t.co/BrvE4CdihE