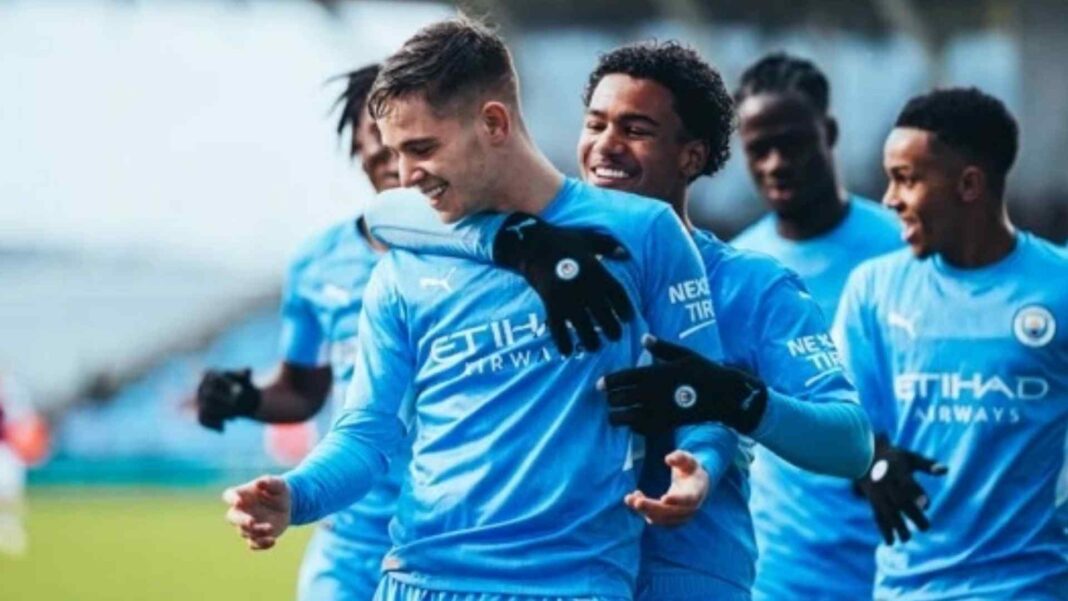 The City under-23s took a huge step towards retaining their Premier League 2 title with victory over second-placed West Ham.

After sitting on the first-team bench to see Harry Kane consign Manchester City to a costly defeat in the Premier League on Saturday evening, James McAtee and Liam Delap dusted themselves off to lead the under-23s to a hugely important victory on Sunday lunchtime.

McAtee, Delap and midfielder Romeo Lavia were all in the senior squad for the Premier League reverse to Spurs on Saturday, but were named in the EDS starting line-up just 17 hours later as Premier League 2 leaders City hosted second-placed West Ham.

It didn’t take long for City to take the lead, despite a bright West Ham start. Juan Larios, in at left-back for the absent Josh Wilson-Esbrand, sent a tempting through ball for Delap who tempted a foul from Ajibola Alese just five minutes in.

Once Alese had been shown a yellow card, there were no doubts over who would take the penalty, as top scorer McAtee stepped up.

McAtee stepped up with confidence, but instead of blasting his penalty down one of the sides, he calmly looped it into the back of the net as Hegyi dived helplessly to the left of the goal.

Should have started vs Spurs.

Why wasn’t he playing yesterday we would’ve won ffs

A bold move on a windy day, could’ve ended up in Audenshaw.

Best thing about the weekend