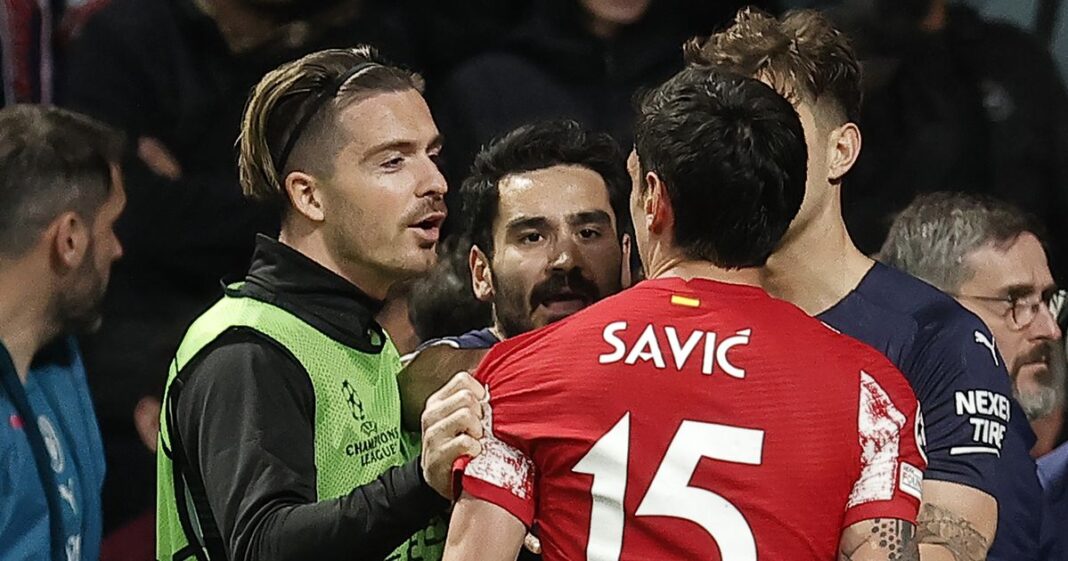 Jack Grealish has been given the nickname ‘Peaky Jack’ by his Manchester City team-mates following his Atletico Madrid antics.

The £100million midfielder was embroiled in several heated exchanges with former City defender Stefan Savic as tempers boiled over at the Wanda Metropolitano – one week on from the pair’s first fracas.

After Grealish replaced Raheem Sterling in the first leg, he was Savic’s direct opponent on the left side of the pitch. At one stage, the Montenegrin defender told the England international, ‘I’ll have you in Madrid’, before the latter explained he was excited for their second meeting after full-time.

Despite the floored England international suffering the red-card challenge, Savic acted unpleasantly and rushed over to him, only intensifying the melee. As he backed off, Grealish, defending Foden, appeared to call the 31-year-old a ‘c**t’ before the latter reacted by pulling his hair.

Savic escaped severe punishment after a VAR review, receiving a yellow card for his actions, but hostilities heightened in the tunnel as the teams returned to their respective dressing rooms. Savic waited for Grealish and went for the number 10, only to be restrained by several others in the tunnel whilst further threats of violence continued around them.

According to The Mirror, following the unsavoury episode, Grealish’s City comrades have christened the Brummie baller ‘Peaky Jack’ in reference to the Birmingham-based hit TV series Peaky Blinders.

Man City fans have taken to Twitter to react after hearing this Grealish’s nickname.

“So goofy of them”
Credit: @KDBpxcked