‘Brilliant news’, ‘Absolutely love this’, ‘Would be great for him’ – Many fans react as PL club weighing up move for Man City forward this summer 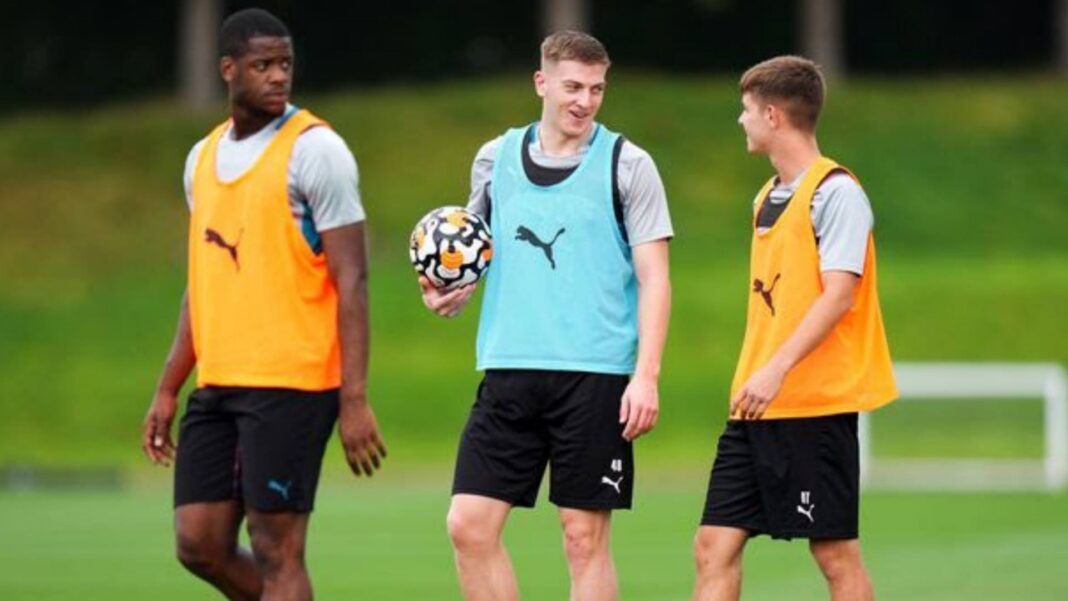 Manchester City fans have been reacting to a post on Twitter which relays a report that claims Southampton are weighing up a loan move for Liam Delap this summer.

The 19-year-old has endured an injury-hit campaign at the Etihad Stadium, being restricted to just three substitute appearances for Pep Guardiola’s side this season.

They add to his three last campaign, where he also scored his first senior goal in an EFL Cup start versus Bournemouth. The six-foot one-inch forward has scored 32 in 32 appearances at the highest youth level, winning the league in consecutive years.

Contracted until 2026, Delap is a big prize in a devastatingly good City youth side and Guardiola is already aware of just how talented the youngster is.

“Liam Delap for me, for the club, is so important for the future,” Guardiola stated earlier this season. “At the end of last season, we said we had to extend the contract.

However, City have just agreed terms for the signing of Borussia Dortmund star Erling Haaland, and with Argentine forward Julian Alvarez returning from his loan, it could open the door for Delap to go and find a temporary home elsewhere in the Premier League.

According to The Sun, Southampton are weighing up a loan move for Manchester City starlet Liam Delap, as they look to add firepower to their spluttering attack.

The Saints have been well stocked for forward options this campaign having taken Chelsea youngster Armando Broja on a season-long loan deal.

With the Albania international due back at Stamford Bridge, it appears that Delap could be his replacement, although the Englishman is expected to be a wide array of options ahead of next season.

“Would be great for him tbh.”
Credit: @canceloimpact

“Perfect move for him really. Another season with the youth teams + limited first team isn’t gonna help him progress.”
Credit: @a779457

“brilliant news, either southampton or even brighton would be a great move for him, can increase his value significantly.”
Credit: @Mcfc_Adi_18

“He will barely get any first team time so why not.”
Credit: @MCFCAG

“Replacement for Broja. Interesting would be a really good move for all parties.”
Credit: @FodenFanatic47

“If he’s not gonna get game time with us a loan to a pl club would be great for him, he’s got a lot to offer us in the future”
Credit: @DaddyTxiki

“He would cook at Southampton.”
Credit: @GundoRole

“It would be great for both he and Mcatee, I don’t see Pep giving them opportunities next season. Would love Mcatee to be loaned to Brighton..”
Credit: @izzy900is

“Brighton, Southampton or even Wolves would be a good loan for him..”
Credit: @SilvaofSalford

Share
Facebook
Twitter
Pinterest
WhatsApp
Previous article‘Get him in!’, ‘He’s Portuguese so must be good’ – Many fans react as Man City in pole position to sign ‘one of the best players in the world’
Next article‘As they should’, ‘Right move’, ‘We’ve baited them again’ – Many Man City fans react to the Club’s stance on United midfield target