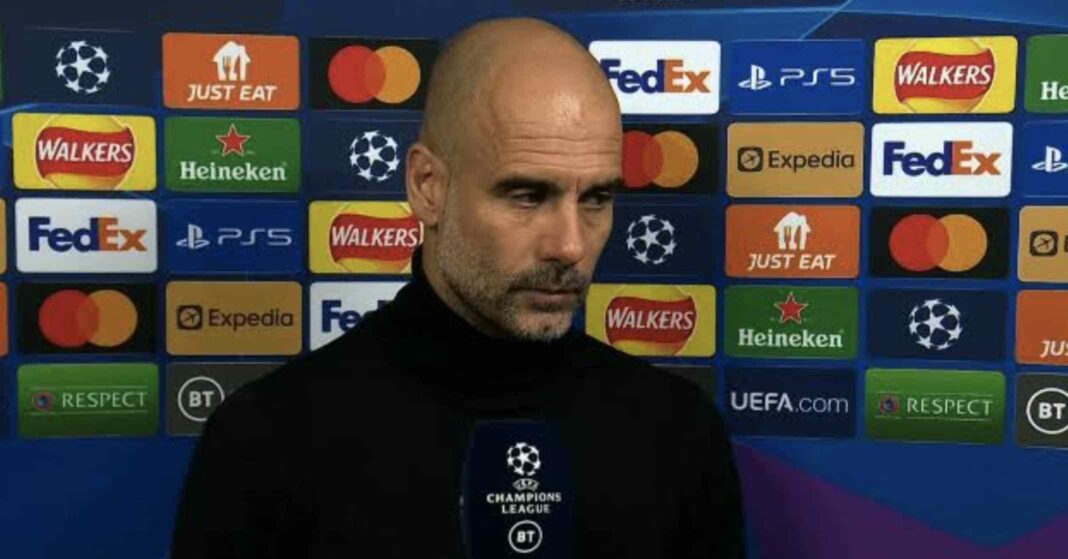 Manchester City boss Pep Guardiola claims his players ‘felt the pressure’ at the Bernabeu as Real Madrid staged a daring late comeback to book their spot in the Champions League final.

Real Madrid fought back from the brink of elimination to beat Manchester City 3-1 after extra time and 6-5 on aggregate in an enthralling and dramatic Champions League semi-final on Wednesday.

City led 1-0 on the night and 5-3 on aggregate when Riyad Mahrez scored after 73 minutes but Real substitute Rodrygo equalised in the last minute of normal time and headed home one minute later to level the tie at 5-5.

Five minutes into extra time Karim Benzema converted a penalty awarded for a foul on him by Ruben Dias and Real, the record 13-times European champions, held the shell-shocked English side at bay to reach the final.

The home crowd were credited for playing a huge part in City’s late capitulation, and Guardiola pointed out after the game that it was impossible for his players not to feel the pressure of the occasion.

“We were close,” a dejected Guardiola told BT Sport. “We were close but at the end we could not reach the final. It’s simple, the first half we didn’t have game, we were not good enough but we didn’t suffer much – when we scored we were better.

“We found a tempo and the players were comfortable. They put a lot of players in the box, put in crosses and scored two goals. We didn’t suffer much but we didnt play our best. It’s the semi-final and the players feel the pressure, they want to [reach the final]. Football is unpredictable and sometimes you have to accept it.

“The players are sad, definitely. We were close to reaching the final of the Champions League. Now we need time to process it and come back with the last four games.”

“This is not his fault.”
Credit: @MCFCyoungboy_

“Extremely painful! We couldn’t finish it off in the end. This is football. We will try again”
Credit: @CityCookingOil1

“He did nothing wrong . This one was the players fault..”
Credit: @IliveforElMago

“Time after time we lose it when we should advance. You can’t continue blaming sports for this. Livepool turned it around at Anfield and scored 4 against Barca, now Real does this. It’s a mentality thing, the willingness to grind it out. We have the football but not the mentality..”
Credit: @sanesou

“This one is on the team losing their heads after conceding. Not good enough, and something that pep cant really control. We’ve been in such situations before, and should know, and do, much better. Let’s end on a high in what has been a slightly deflating season, relatively ofc..”
Credit: @otto7474

“We go again at the weekend”
Credit: @PricelessKDB