‘Was not 100%’, ‘So so poor last night’ – Many fans vent their frustrations on ‘shaky’ Man City man who ‘was amazing the whole game’ 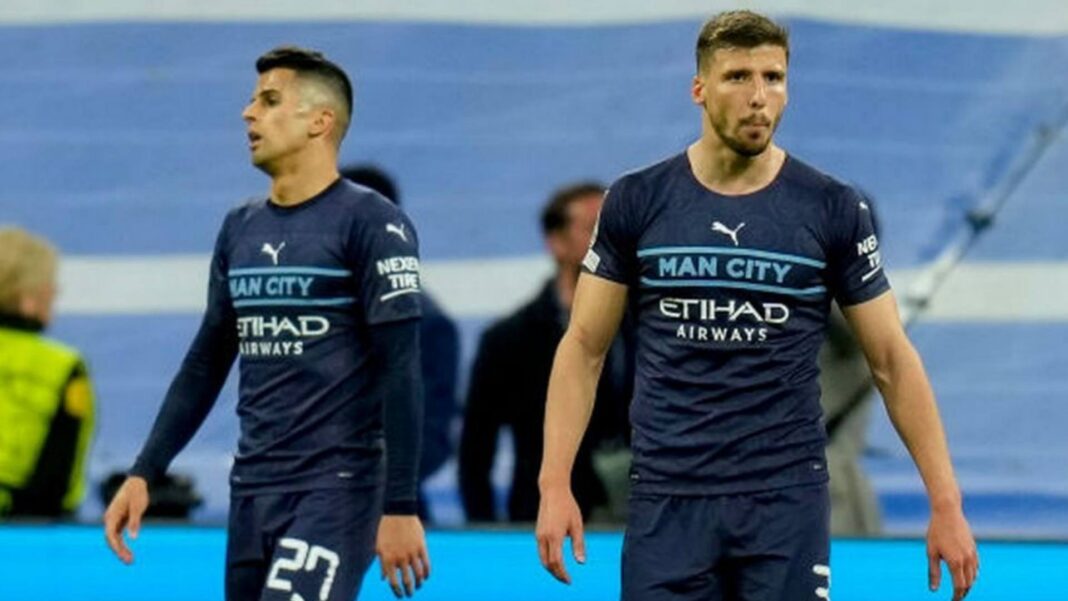 Manchester City fans couldn’t quite believe what they witnessed at the Bernabeu on Wednesday evening and took to social media to vent their frustrations on Ruben Dias.

The 24-year-old started alongside Aymeric Laporte and was nearly rocked early on when Karim Benzema had a close-range header that he should have done better with, but Dias pulled himself together for the majority of the game to keep Real at bay.

That changed in the final few minutes, however, when Dias was beaten in the air by Rodrygo for Real to level the game in normal time.

In extra time, it was the Portuguese international who gave away a penalty that Benzema converted, so Dias undid all his fine work in the first 90 minutes to become the villain.

Mike McGrath of the Telegraph gave the 24-year-old a player rating of 6/10 and noted that his performance was ‘strong’ until later on while The Daily Mail gave Dias him a rating of 5.5/10 and said he was ‘shaky’ and ‘poor’ at times.

Stuart Brennan of the Manchester Evening News gave the Portuguese international a player rating of 6/10, calling him ‘superb’ for much of the game but saying his foul in the area was ‘rash’.

Against Real, the 24-year-old had 77 touches, won four aerial duels, completed 81.3% of his 64 passes, made two tackles, had one interception, made five clearances and blocked one shot.

Man City fans, then, were also all over Twitter sharing their thoughts and opinions on Dias’ display against Real Madrid. Here’s what some of them had to say on Twitter…

“Ruben Dias was disappointing tonight. 2 goals from 2 crosses and then to concede that penalty in extra time. Expected a lot more from our captain.”
Credit: @City_Chief

“Just back from injury, I’ve never seen anything like that before and never will again. No shot on target in 90 minutes and win the game 3-1 with a dodgy penalty.”
Credit: @barrick_colin

“He was one of the best players until the penalty besides that you can’t blame him”
Credit: @JesusCityFC

“I love Dias but I think if I was to blame one player it’d be him”
Credit: @SherrattCallum

“So nobody at all wants to put the blame on Ederson, that guy has been backed up by his defence for the whole season, and when its time to step-up; he doesn’t! Look at the first goal for instance.”
Credit: @SboneloMuzi

“Such a bad take. Ruben was not 100% when it mattered, and that’s okay, it’s the Bernabeu. It still doesn’t change how we don’t capitalize on the chances we create. It should’ve been 4-1 at the end of the first half last week. I’d rather forgive Ruben than forgive last week..”
Credit: @joseperez_72

“He’s still got a way to go to replace Kompany”
Credit: @Blueblood1233

“Ruben Dias has been very ordinary all season. So so poor last night. Wouldn’t see Van Dijk defending as bad as that. Its the reality. He was brilliant last season, but he’s lost that aura about him now. John Stones is City’s best defender at the moment by a country mile.”
Credit: @Komps4

“Your also forgetting Grealish missed 2 crucial chances before Madrid scored, pep was spot on with his subs. Pep managed the game well the players let him down, players who are normally so reliable crumbled yesterday ie Ruben Dias”
Credit: @FourmidableCent

“This loss will be a learning lesson for this team. This one will hurt just as bad if not worse for the likes of Ruben Dias, Ederson and Laporte. They completely switched off the last few minutes. Santiago Bernabeu shell shocked them. A lot is also to blame the refs and luck too!.”
Credit: @RobustRuben

“Jesus Christ yeah the pen was his fault but nothing he could do against the crosses, the line was perfect for the first but Cancelo dropped for no reason”
Credit: @its_ollix

“He was amazing the whole game, stopped everything, there were 5 or more players in the box after the 85′ hes amazing but isn’t two”
Credit: @RossettoIsNot

“All the fans out here so quick to blame players etc , Madrid were always gonna pose a threat , we can take away how well we played the first leg and how well we did to keep them at bay 90 odd mins of the 2nd”
Credit: @jamesl1233211