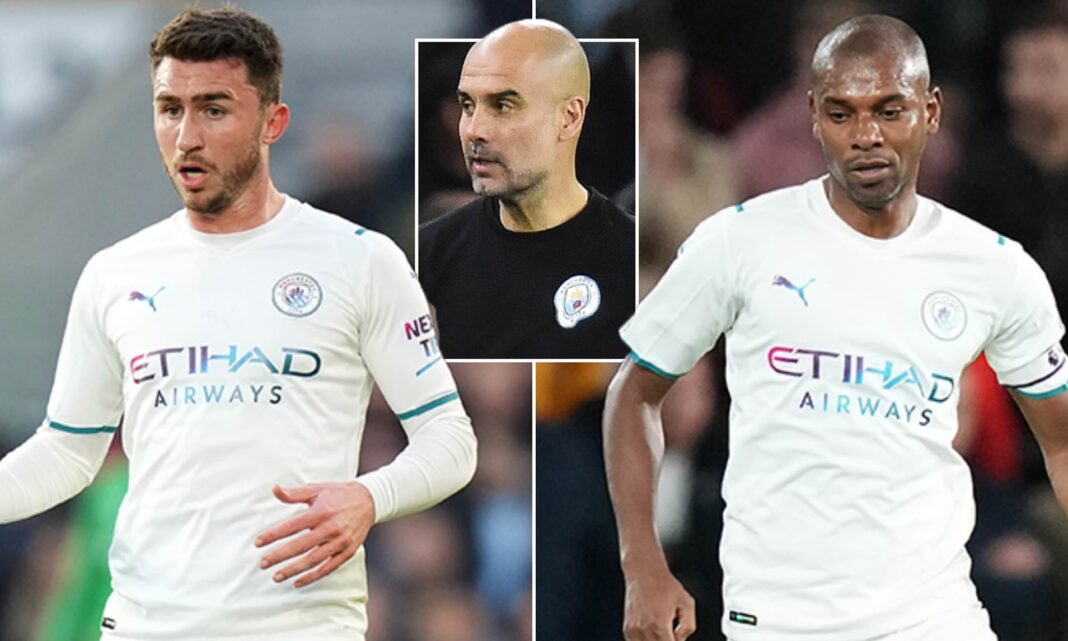 Manchester City’s defensive injury crisis worsened on Wednesday evening during their 5-1 win over Wolves and could have a significant impact on their last two games of the season – including the game against Aston Villa on the final day.

A virtuoso display from Kevin De Bruyne fired City to a crucial win at Molineux which moves them three points ahead of second-place Liverpool, while Pep Guardiola’s men now have a goal difference which is seven better than their closest rivals.

However, maintaining that lead over Liverpool in the final two games looks a much tougher task after City suffered a double injury blow in the West Midlands.

Aymeric Laporte was forced off around the hour mark against Wolves after he was involved in a nasty collision with striker Raul Jimenez, with the Mexican crashing into the centre-back’s standing leg at speed.

It looked like a nasty injury and, after trying to play on, Laporte was forced off and was seen icing his knee in the dugout.

To make matters worse, Fernandinho has also picked up a knock. The midfielder was deputising at the heart of defence due to the lack of options, but was withdrawn in the latter stages.

Speaking after the game, Guardiola revealed both players are now major doubts for the final two games of the season.

“Apparently it doesn’t look good with Fernandinho,” he said. “It’ll be difficult for Sunday. Aymeric had a tough knock and we’ll see for West Ham.”

City finished the game at Wolves with Rodri operating at centre-back, along with Nathan Ake, who is still nursing an ankle niggle himself, one which ruled him out of starting the fixture.

Guardiola confirmed last week that defenders Kyle Walker, John Stones and Ruben Dias will miss the remainder of the season, and none of the trio were therefore involved against Wolves.

Joao Cancelo and Oleksandr Zinchenko played in the full-back roles at Molineux, as they’re likely to do again this weekend against West Ham, while City’s most likely centre-back pairing appears to be Rodri and Ake.

Youngsters CJ Egan-Riley and Luke Mbete are also options, but Guardiola has been reluctant to hand the duo game-time this season.

“Our defence is cursed this season.”
Credit: @furqan0005

“I think we need to look at the youth now. Mbete or Egan Riley?.”
Credit: @a1exbd

“Everyday since the Semi Final i see some or the other injury update, makes me wonder whether we were lucky to be knocked out.”
Credit: @sankalp2512